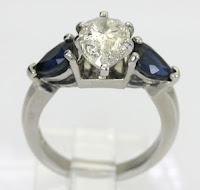 This month’s blog is a celebration of beautiful blue sapphires. Considered one of the most royal gemstones, September’s birthstone is rich in history and lore.

Following Prince Charles’ proposal, Lady Diana Spencer chose a diamond and blue sapphire engagement ring from a Garrard catalog, instead of having a diamond ring custom made for her, which was the royal custom.  The decision was controversial, but also launched her reputation as “The People’s Princess.” Since then, affordable replicas of her ring became so popular, that it became known as “the commoner’s ring.”

The ring has a large oval sapphire—estimated to be between 9 and 12 carats— surrounded by 14 round diamonds set in 18K white gold. The ring cost around $60,000 when it was purchased in 1981, and today has been estimated value between $500,000 and $4 million. Prince William inherited the ring following Princess Diana’s untimely death, and famously presented it to Kate Middleton, Duchess of Cambridge, when he proposed to her in November 2010.

This sapphire is a 260.37-carat oval with an evenly distributed medium-dark saturated blue color. The sapphire was later set in a brooch consisting of 56.60 carats of smaller diamonds.

The Star of India

Discovered in Sri Lanka about 300 years ago and currently on display at the American Museum of Natural History in New York City, the Star of India is about 2 billion years old and weighs 563 carats—about the size of a golf ball—making it the largest gem-quality blue star sapphire in the world.
The presence of the mineral rutile gives the gemstone’s appearance a slightly milky quality, as well as the distinctive star effect, known as asterism. Tiny fibers of rutile in a three-fold pattern reflect incoming light in the star pattern. In addition to its great size, the Star of India is unique because it has asterisms on both sides of the gemstone.

On October 29, 1964, the world-famous sapphire was stolen from the American Museum of Natural History in New York City. Several months later, the uninsured Star of India was recovered in a locker in a Miami bus station.

If you love jewels and ever visit London, be sure to see the Stuart Sapphire, which often goes unnoticed because it is located at the back of the Imperial State Crown.

The 104-carat Stuart Sapphire is a fine blue—though flawed—gem. It is oval in shape, about 1½ inches by 1 inch in width, and is set in a gold brooch. The gem is drilled at one end, probably so that it could be worn as a pendant.

Dating back to 1214, the Stuart Sapphire was owned by members of the Royal House of Stuart, for whom it was named. Robert II, the first monarch of the Stuart dynasty, was the first to own it, and it was later inherited by James II, who took it with him to France when he was deposed in the Glorious Revolution of 1688-89.

James II gave the sapphire to his son James Edward, who passed it on to his son, Charles Edward. Today, it is on display as part of the British Crown Jewels collection at the Tower of London, and is located on the back side of the British Imperial State Crown.