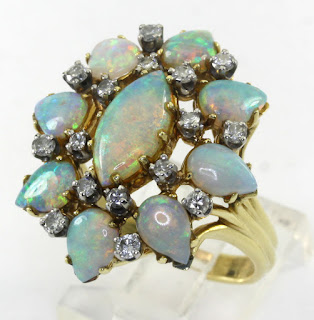 Opals, the birthstone for the month of October, have a mystery and history as interesting as their iridescence. Whether you were born in October or not, test your knowledge of opals with the Empire Jewelers true or false quiz! Scroll down for the answers—but don’t cheat!
October Birthstone True or False Answers:
Whether you’re birthstone is an opal, you’re looking for a gift for an October birthday, or you just love this fiery gemstone, shop Adina’s eBay store for estate, vintage and antique opal jewelry, available at true wholesale prices. We have vast selection of opals and other fine gemstones, and we will deliver a buying experience that’s above your expectations.
Posted by Adina Jewelers at 8:28 AM