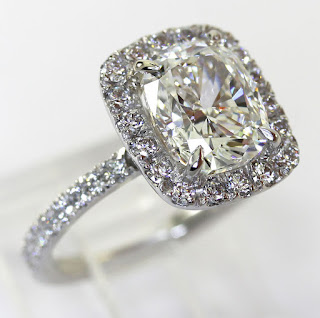 Those born during the month of April have one of the most regal and desired gems as their birthstone: the diamond. Here are some interesting facts about diamonds you may not know.

Diamonds are a naturally occurring allotrope of the element, carbon. Diamonds are formed deep inside the earth’s interior when carbon is crystallized over a long period of time due to two factors: heat and pressure.

Diamonds were first mined in India around 800 B.C. Today, the four top diamond producing countries in the world are Australia, Zaire, Botswana, and Russia. Interestingly, Crater of Diamonds State Park in Arkansas is the only diamond-producing location in the world that allows the public to dig for and keep the diamonds they find.

Diamonds are appraised and priced based on a standard grading system by the Gemological Institute of America (the GIA). The grading system is known as “The 4 Cs” and consist of color, clarity, carat weight, and cut.

Diamond jewelry has gained fame as a result of its presence in legendary films. Marilyn Monroe famously sang “Diamonds Are a Girl’s Best Friend” in the 1953 film, Gentlemen Prefer Blondes. Actress Jane Russell later sang the signature song in the same film, in court, while pretending to be Monroe’s character, Lorelei.

In the 1963 film, The Pink Panther, Peter Sellers played clueless police inspector Jacques Clouseau, on the trail of a jewel thief known as The Phantom. In the movie, “the largest diamond in the world” is called The Pink Panther.

And who can forget James Cameron’s movie Titanic starring Leonardo DiCaprio and Kate Winslet, in which the fictional blue diamond called “The Heart of the Ocean” is tragically lost to the ocean.  Diamonds have also gained notoriety as a result of record-breaking auction sales. In December 2011, Elizabeth Taylor’s renowned jewelry collection was auctioned at Christie’s in New York. One of her most famous pieces was the Taylor-Burton diamond ring, given to her by husband, Richard Burton. The Taylor-Burton diamond is a 69.42 carat pear-shaped stone estimated to be worth $3.5 million. Taylor sold the diamond in 1978 following her divorce from Burton to fund her charity work.

On December 10, 2012 at the final lot of Christie’s “Magnificent Jewels” auction, a new world auction record was achieved for a reddish-orange fancy colored diamond. The rare 3.15 carat diamond is the largest reddish-orange diamond ever graded at the GIA, and sold for $2,098,500, setting a new per-carat record price of $666,200.

In the market for diamonds? Whether you’re looking for an engagement ring, a tennis bracelet, diamond stud earrings, or more, shop Adina’ eBay store for stunning estate, vintage and antique fine diamond jewelry, available at true wholesale prices. We have vast selection of certified diamonds and other gemstone jewelry for women and men, and we will deliver a buying experience that’s above your expectations.
Posted by Adina Jewelers at 9:12 AM